These are my notes from Anders Hejlsberg session on Future Directions for C# and Visual Basic.

It's been more than 10 years since managed code was introduced back in PDC 2000. Every new release of C# has had one or two major themes:

The two major themes in the next release (version 5) are support for WinRTin Windows 8 and asynchronous programming.

Asynchronous Programming is becoming the norm in modern, connected applications.

About 10-15% of the WinRT API supports asynchronous operations. Sounds like a small percent but this percent is probably the most used stuff.

There are different asynchronous programming models in Windows 8 and .NET

All of these models are objects representing "ongoing operations".

You can use Task.WhenAll() to run multiple tasks asynchronous in parallel!

It turns out that asynchronous method don't start new threads! I need to do more reading on this. Threading is only need when you run CPU intensive operations like a loop to perform math calculations.

the two through IAsynchOperation (didn't quite get why)

Anders is obviously a big proponent of static languages and took several jabs at the dynamic nature of JavaScript. The funniest line was when he said:

Another feature that is coming in C# is what is called Caller Info Attributes. These are built-in attributes that you can add to parameters to a method to

receive the name of the caller file path, the caller line number and member name.

This is very nice for logging code.

Towards the end of the session Anders talked about what’s coming in C# 6.0 and a project named “The Roslyn project.” The basics of this project are:

With feature the syntax tree produced by the C# compiler becomes available to other tools so that they can peek inside the code with a true semantic knowledge of what the code does.

Anders shows a C# interactive prompt in which he was able to create a C# program on the fly, line by line, and execute each line as it went. This is nothing new to people that use JavaScript or Ruby but for a static language like C# this is huge! I was really impress on how clean the syntax to do this was.

The following picture (blurry) shows an example of what he did. In this code he declares a square function in a string and executes is in the program via a delegate. Wicked stuff. 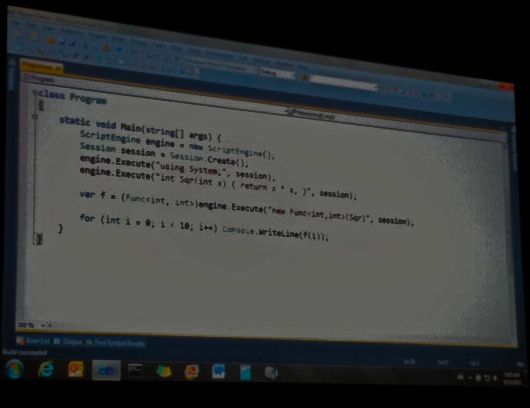 Another example of using Roslyn that we showed was a feature to paste C# code as VB.NET code and vice-versa. This showed how the semantic of the original code was preserved.

There is a CTP available of Roslyn already.

The C# and VB.NET compilers are being rewritten in managed code.