A few days ago I configured Sublime Text 2 editor to use three different hotkeys for compiling and running CoffeeScript files. I am new to Sublime so I consider somewhat of an achievement that I was able to pull this off with help from the interwebz and a bit of luck.

Run a CoffeeScript file in the Sublime console

The first hotkey that I configured runs a CoffeeScript file and displays its output to the Sublime’s console window. This is useful when I want to quickly run a small CoffeeScript program that outputs to the console. The following screenshot shows this: 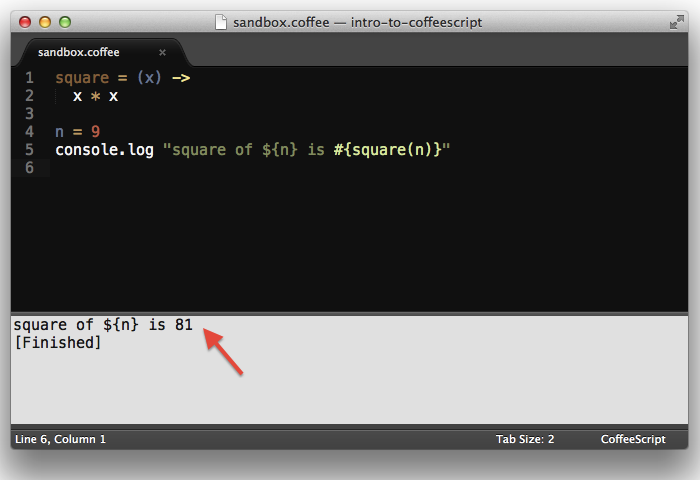 To wire up this hotkey I created a new Build System for CoffeeScript files. You can do this via the Tools + Build System + New Build System menu option. Copy the following code inside the editor and save it as CoffeeScriptRun.sublime-build in the default directory (in my Mac the path was ~/Library/Application Support/Sublime Text 2/Packages/User)

From now on, when I hit command+B (?+B) while editing a CoffeeScript file, Sublime automatically calls the CoffeeScript compiler with the current opened file. Command+B is the default key in Sublime Text to run the build command. You can also run this command from the menu by going to Tools + Build. The output of the CoffeeScript will be displayed in the Sublime Text console at the bottom of the screen.

Generate the JavaScript file for a CoffeeScript file

The second command that I configured was to re-generate the JavaScript file associated with a CoffeeScript file.

One easy way to do this is to create another build file like I did above but use a slightly different command to tell the CoffeeScript compiler to produce a JavaScript file. The disadvantage of this approach is that then I have to toggle between build modes via the Tools + Build System and then use command+B to produce the JavaScript file. This is just too many steps for something that I need to do quite often.

What I really wanted was a hotkey to re-generate the JavaScript file in one shot. To do this I had to create a new key binding (Sublime Text wording for hotkey) by going to the Sublime Text 2 + Preferences + Key bindings - User and entering the following text:

Two things to notice in this code. One is that the name of the class (CoffeescriptToJavascript) is the CamelCase version of the name of the command (“coffeescript_to_javascript”) that I defined in the key bindings. This is very important as Sublime will automatically look for a class with the CamelCase version for the value defined in the key bindings.

I wish I could remember where I stole the idea for this code, I know it was somewhere in the Sublime message board but I didn’t save the link.

The second thing to notice is that the run command in this code is calling the CoffeeScript compiler (coffee) and passing both the -c flag to produce the JavaScript and the name of the file to compile (which will be the name of the current file being edited.)

I saved this plugin file as CoffeeScriptCompile.py in the same location where you saved the build file that we created before. I restarted Sublime to make sure the new plugin was loaded.

From now on, when I use command+J Sublime runs coffee -c somefile.coffee and generates the corresponding somefile.js file. This command does not output the result to the console, though.

Outputting the JavaScript code to the Sublime Console

Lastly, using the steps defined in the previous section I created another plugin to output the JavaScript to Sublime’s console rather than to a file. This is very useful when I want to dig and see how a particular CoffeeScript feature is translated to its JavaScript equivalent.

I wired this command to the command+M key and pass the -p flag to the CoffeeScript compiler to get the JavaScript to the standard output.